For all you fans of backwoods racing, we give you the Grand National Cross Country race for the ages. Enduro racing at its finest, the challenges never let up. This is the most grueling racing on two wheels… and it’s not even close.

So, what does it take to compete in this race? How do you go about training to win? The article below gives us a glimpse of how its done. But knowing how to do it and being able to do it are two very different things!

Moto Spy Pays a Visit to Kailub Russell as He Takes on a Round of the GNCC Championship.

The Grand National Cross Country Championship (GNCC) is America’s premier woods-racing discipline in the two-wheel world. With 13 rounds spanning the woodlands of the East Coast, the GNCC Championship pits some of the world’s best enduro riders against the elements, insanely rough tracks, and each other to determine a champion. Each race lasts around two hours, and with riders’ heart rates averaging around 180 bpm throughout, GNCC is a battle of attrition more so than just about any other form of offroad racing.

KTM’s ace in the hole in GNCC is a young North Carolinan by the name of Kailub Russell. The 26-year-old has three GNCC titles to his name, and seems on his way to a fourth so far in 2017. At round four in Camp Coker, South Carolina, Russell took Red Bull Moto Spy through yet another one of his winning weekends in GNCC.

The GNCC Is No Joke.

GNCC racing is a game of finesse, and aggression. Gone are the days when a race could be won by just cruising around riding at half throttle the whole time. GNCC racers now are on a level of fitness and bike ability that closely rivals the stars AMA Pro Motocross — many GNCC racers are also professional caliber motocross athletes.

In fact, to the untrained eye, GNCC looks just like motocross, just in the woods. But the tracks and racing in the woods is a far cry from the 100-plus-foot jumps and deep, loamy soil of MX. GNCC riders are much more subject to natural terrain and elements seemingly designed to trip them off their rhythm, be they trees, roots, dust or extreme dirt conditions. It’s a discipline not for the faint of heart, as proven by Russell’s heart rate data from round one in 2017. 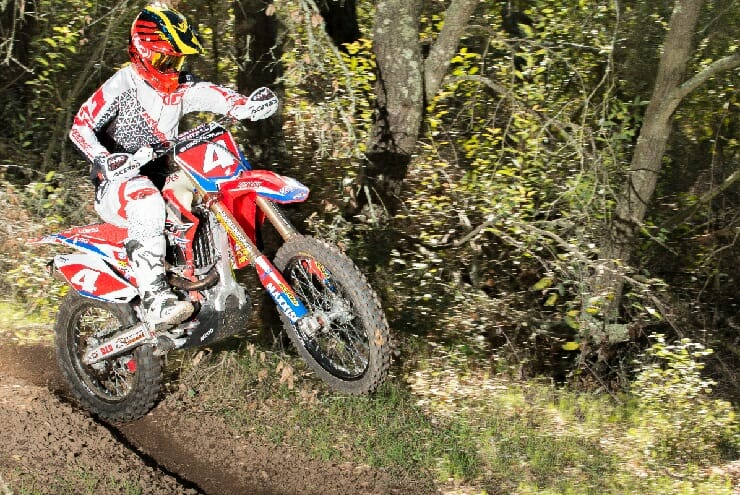 To most people, a dirt bike race is a dirt bike race. But racers who have set tread on a GNCC course know that it is a form of racing unlike any other. A fast pace, a technical and brutal race track and the heat and humidity that overtake the eastern United States all make GNCC an arena that separates the men from the boys, as just about any GNCC fan is sure to tell you.

Pala Fox Raceway In, Glen Helen out for Outdoor National

CL has been blogging it up for BTO Sports since the days when Bob "Hurricane" Hannah ruled the motocross roost. In fact, his guerilla-style coverage of the now-infamous "Massacre at Saddleback" is now considered one of the great MX blogs of all time. Enjoy the blogs, folks- that's the whole idea!
Tagged bto sports, Enduro, Grand National Cross Country | Posted in Motocross, Motocross Events, Motocross News, Photos, Videos