This product has been discontinued 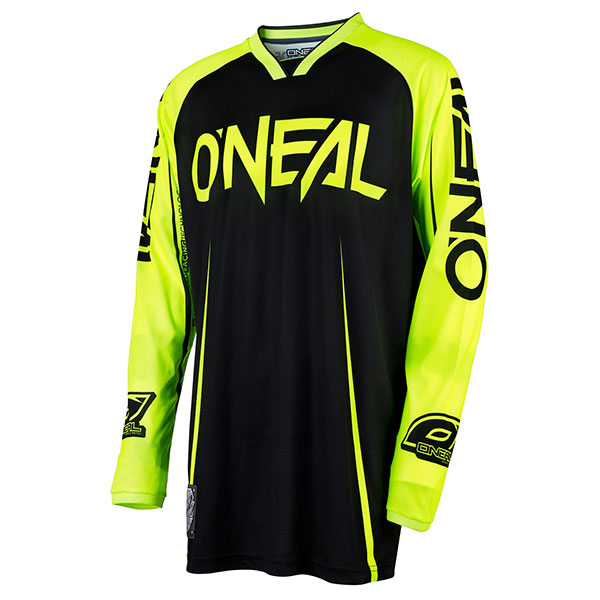 This product is no Longer Available

Unfortunately, this product has been discontinued by the manufacturer and is no longer available.

Back in the 1960’s, when off-road racing was in its infancy, there was a sever lack of racewear that could withstand the abuse of the sport. Jim O’Neal recognized the lapse in off-road apparel and jumped at the opportunity to fill the void. He founded O’Neal in 1970. For Jim, it was never about getting rich. It was always about providing riders with the gear they needed to succeed. The industry has evolved over their 47 year history, but their commitment & passion for the sport has never wavered. Their lineup now includes five brands under the O’Neal banner, with products available in 7,000 retail locations around the world. The 2018 release continues their reputation as industry leaders in quality and performance that riders have come to expect from O’Neal. The brand new O’Neal Mayhem Lite Blocker Jersey is just one of many great dirt bike jerseys in this years’ release!

The O’Neal Mayhem Lite Blocker Jersey makes a return for the 2018 season! This dirt bike jersey was actually released recently, but has received a few new colorways as part of this large release. Upon the initial release, the Blocker only came in a flo-yellow & black scheme. It is now available in a sharp black teal, & gray palette and a cool white, red & gray. The dirt bike jersey features large O’Neal logo across the chest and back in the accent color. It also features the same logo in black down the arms and the “O” alternate logo down near the wrists in the accent. Below the rear collar features the O’Neal mantra “Enjoy the Ride”, almost meant to mock other riders as you pass them. All the graphics on this motocross jersey are sublimated, which means they’ll never fade. The eye popping colors will stay just as sharp as the day you bought the jersey.

The O’Neal Mayhem Lite Blocker Jersey isn’t just a good looking jersey. It has some cool features that make it the ideal choice for either track or trail riding. The overall fit of this dirt bike jersey has been revamped for the new season. It was designed panel by panel to create the most ergonomic fit possible. The jersey was constructed with the active rider in mind, and allows for a natural range of motion without constraining the rider. The Mayhem Lite Blocker motocross jersey has a streamlined and athletic fit, designed with serious racers in mind. It is also designed with a longer fit, as it’s meant to be tucked in to reduce drag. The jersey tail has silicone printing, which creates a high friction surface when it’s tucked in. It is also the lightest jersey that O’Neal has ever produced. Riders will notice how light this motocross jersey is from the second they throw it on.

At BTO Sports, we carry all the newest O’Neal dirt bike jerseys, like the 2018 O’Neal Mayhem Lite Blocker Jersey. Make sure to check out their entire 2018 lineup which includes tons of jerseys, pants, helmets, gloves and more!